The Ram Rider is a Legendary card that costs 5 Elixir and can be unlocked from Hog Mountain (Arena 10). It is a unique card that targets building and roots and damage enemy troops and buildings with her attacks. This makes her a good defensive card and also a strong attacker, as it charges like a Battle Ram and deals damage once reaches its target.

As have shown in the post of The Best Legendary Cards, the Ram Rider is considered the worst legendary card due to actual meta, but this doesn’t mean that it’s a bad card, on the contrary, this card is great in some specific decks. Keep reading to see more about this card and how to get the most of it.

Here are the best decks with Ram Rider in Clash Royale, starting by TOP 1:

The P.E.K.K.A. + Electro Wizard combination is insane defensively and counter-attacking.

The key of this deck is to get value out of your Ram Rider. It’s not like the classic Bridge Spam deck with Battle Ram where you can start with it on the back to kite, in this Ram Rider deck you need to be more passive, do not play her for no reason at all, spamming it at the bridge or starting it from behind. To get value out of her, you should play it as a defensive card and use your Bandit or Dark Prince offensively, and only use her offensively when you know that you have an elixir advantage over your opponent.

The best ways to start the game are with Bandit on the bridge to apply pressure, or at the back, also Mother Witch on the back, or using Barbarian Barrel. Do not use Electro Wizard in the first place because they can have Sparky and you’ll get in trouble. Also Dark prince counters Goblin Drill so don’t use it as first place until you know that your opponent doesn’t have that card.

Check out the following post of the best P.E.K.K.A. decks in Clash Royale.

This is an aggressive deck in which you’ll be spamming cards at the bridge and making the Lumberjack Rage Spell your best friend.

In order to make it more free-to-play, you can change Dark Prince for Bandit and Magic Archer for Musketeer or Firecracker, but definitely this is the best version of the deck.

You always have to think about your opponent’s elixir and then punish for not having enough to defend, even you’re using all your actual elixir. Bridge Spam decks consist on that, knowing that you have elixir advantage and spam cards at the bridge to punish your opponent.

There’s also a good version of this deck but having Heal Spirit instead of Ice Golem, both cards are solid so try them out!

Check out the following post about the best Lumberjack decks.

This deck has Three Spells on it and also we’re adding the Mega Knight as your AoE defensive troop.

Having Mega Knight and Inferno Dragon on the same deck is one of the best defensive combinations in the game, but easily countered with P.E.K.K.A. + Electro Wizard.

You should be more aggressive with your Ram Rider in this deck as you don’t have many Bridge Spam cards, only Bandit and the Ram Rider.

Make sure to combine Ram Rider with Snowball to move out the troops and slow them.

Be patient with your attacks as this is an expensive deck. Be sure to have elixir advantage to make your attacks and try to defend and counter-attack, you shouldn’t initiate.

It’s always good to have Mother Witch on a deck as she’s so powerful. 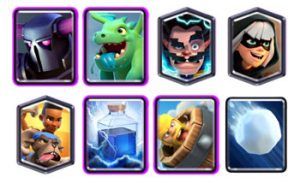 Closing our Top Ram Rider decks, here is the P.E.K.K.A. Lightning deck that was so popular.

Great defensive potential, strong counter-attack, be ready to use the Lightning combination with your Ram Rider but only on Double or Triple Elixir time because both together sum 11 elixir. The Lightning should be used defensively whenever it’s necessary.

The Baby Dragon provides the AoE damage this deck needed.

This deck is so good against Beatdown decks and also Log Bait decks.

Ram Rider decks for lower Arenas
All these previous decks have a lot of legendaries on them and are not much free-to-play friendly. Now I’m showing you 3 decks that you can use on lower Arenas, where your card levels are not that high and maybe you didn’t unlock every card of this game. Copy your favorite one! 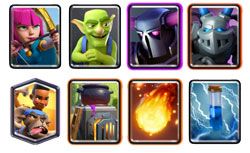 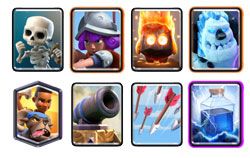 Decks with Mega Knight and tips

Mega Knight is a defensive card that provides a very good counter-attack if it’s played correctly. It is a Legendary Card that can be obtained from Arena 7, the Royal Arena. Here you’ll see some […]

The Ice Wizard is no longer the worst legendary card in the game thanks to the balance changes introduced in August 2017. In fact, it has become a highly viable and very effective card in […]

The Best Decks with Lumberjack

The Lumberjack is a Legendary card that costs 4 Elixir and can be unlocked from Serenity Peak (Arena 14). It is a unique card as it drops a Rage Spell once he dies, causing the […]